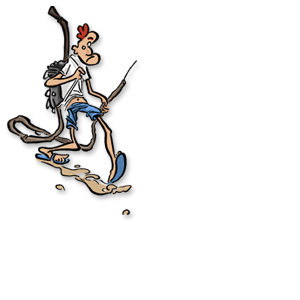 The Master of the Seasons – Part 2 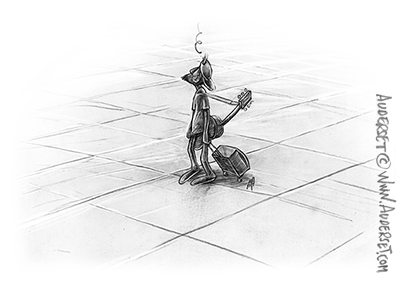 Touching the bottom in order to get to the top

After a brief investigation, I discover that there is a big mission which each year gives several millions of presents to the poorest families on the planet….

It’s not only a demographic that can’t read, but also that needs, more than anyone else, to have the enriching experience of the most beautiful message of hope that there is, the one that helps people triumph over everything; the one that is summarized in my little comic book.

How are we going to go about it?

I understand pretty quickly that “contact” addresses on the internet are in reality just dead ends.  When they aren’t quite simply abandoned, they are strictly monitored by fierce watchmen known as secretaries, whose job consists pretty much entirely of filtering the messages. (The last thing we need is one of those plebs bothering the leaders.)  By chance*, I at last meet someone who knows one of the main leaders of the youth section of this mission!  Over the months, the tenacity of my efforts to obtain “the” telephone number has at least the merit of being a source of inspiration of jokes for my entourage, but finally….yessssss! I’ve got it!

Voice from the back of the workshop: ‘Ha, ha, ha, yes, but it’ll never work!
I pick up the handset of the telephone. The cord uncoils slowly, I feel like Indiana Jones, poised to give a flick of his whip, only this time the target’s on the other side of the Atlantic.

(To tell you the truth, I am freaking out a bit…)

Sitting at his desk, one of the big chiefs of the mission is wondering about some old comic books produced by his predecessors that he has just found in the archives:
‘Lord, would it not be a good thing to do these again….?’
Like a reply to his prayer, the phone rings….it’s me calling.
The guy, in a bit of a state of shock, doesn’t give anything away, but asks to know more.

One thing leading to another, from Skype to official correspondence, with the help of a real treasure by the name of Heyidlovetoeatasteak (not her real name), discovered at about the same time, who helps me translate my poor English (awesome coincidence: she lives 30 mins away from the mission), he ends up giving me an appointment in his office.
(Little, but non negligible detail: for me, this latter is situated at the other end of the earth!)

My first rendez-vous (just before the appointment with him) will be on Tuesday 11 June at 8.00 a.m. on the dot.
They are giving me 10 minutes to give my testimony to the 300 members of staff. A special privilege which will not be offered a second time, if I were to happen to arrive late. (Late, me… !? Never !)

I fly away into the void

After scraping some money together for the flight, I honestly think that I won’t have enough money for a hotel… But that doesn’t matter, the stakes are too high, I am taking my flight. To Washington, then I have to get a connection.

I enjoy making friends with everyone during the flight (that’s what I’m like…. !) As I leave the first plane, the stewardess, glad to have been able to have a chat with me in Spanish, tells me: ‘If ever you need any help, I’m here till 11 p.m.!’
She knows perfectly well, however, that I am leaving on the 5 p.m. plane.  I have a sense of foreboding…
‘Lord, could it be, by any chance, that you are trying to tell me something … ?’
Whatever… Tomorrow morning at 8.00 I have a rendez-vous with my destiny (and indirectly with that of millions of disadvantaged people) and that’s all that matters.

Sorry, it’s not going to be possible !

Faced with my consternation and my persistence, the smile of the lady behind the desk is no longer anything more than a muscle exercise.  Her voice betrays some annoyance. The politeness is just a light veneer of kindness behind a cold, professional indifference.  She hands me a photocopied sheet with writing in an incomprehensible language: the language of administration (and in English to boot). As the solution for every problem, it contains the number of an automated answering service, where I won’t even be able to leave a message. I get the idea: this sheet of paper is nothing but a bone to chew on, so that the complainant leaves her in peace; to accept her piece of paper is to give up. There is so little understanding in this place that I decide to give it some of mine (the person really responsible is hidden behind her; I fully understand that this evening can’t be easy for her either).
I take the piece of paper.

I know nobody here, I am so far away from home, the airport is about to close and I am politely asked to vacate the premises by guys who look like policemen and who are just doing their job, and, of course, it is nobody’s fault… (him again!)
Mercifully, I meet the Hispanic air hostess again. She explains to me what options remain for me: in other words… nothing !
She provides me with a thin blanket and a wash bag with a toothbrush kit, and she looks sincere when she wishes me all the best before heading off; when all is said and done, at least she did respond to my most basic need – a semblance of compassion in this artificial world.

A drop-out… I wander around the airport with my luggage and my guitar on my back.
It’s not the first time that I feel completely dumped. But this awful feeling of abandonment is surely nothing compared with the way the thousands** of people feel that I intend to help through this journey… , for, if I don’t understand anything either about what is happening to me, I know at least that, for sure,  God is not far away.

You would think that another invisible force was trying to prevent my rendez-vous. However, I have to make it, they’re counting on me… ! (or not)
Who knows, maybe, some day, someone will thank me for doing this…
(**in reality it’s much, much more, but I am just saying thousands so you don’t think I’m a show-off)

The only seats that I can find nearby have nasty arm-rests, and I have the impression that they are deliberately designed like that to prevent a poor guy like me from stretching out on them. I can just about manage to work out the level of lack of decent compassion required to have the ability to ask an engineer to design a seat like that. I lie down well underneath it so that a passer-by doesn’t trample on me. If the fake luxury marble floor isn’t a great success as far as colour is concerned, it is excellent when it comes to durability. I think that I have never appreciated a blanket as much (even if it was lightweight) as during that night.

As I don’t have much power left on my mobile phone, which serves as my alarm clock and I am afraid that it won’t ring on time, but I also don’t have much power left in my body, I doze….
During the night, several people come and kick me all over to rob me; or did I just dream that?  Anyway, I feel in the same state as if it had been real: I am shattered!  I wake up all the time wondering if I have been sleeping or not….

Strange zombies are wandering here and there all around me (…No, phew……! they’re just weirdos). I cling tightly on to my suitcases so that they don’t run off, in case, inadvertently, my tiredness leaves this body for the land of nod…..as long as I get up in time for my plane.

4.30 a.m., I’m waiting at the end of an interminable queue that isn’t moving forward (blast, am I becoming a zombie too!?). Victory is possible, the plane is taking off (and what’s more, I’m inside!) Before losing power, my mobile had received a message from my two guardian angels (prayer team, see the comic book Appointment in the forest page 33) to tell me that they were on to it.

Heyidlovetoeatasteak and her husband are waiting for me at arrivals. (Amazing – but then that means that contacts on the internet are real people!!?)