A story from “Appointment in the forest“

Tears, that’s nothing…
Scarcely has the taxi dropped me off than already it disappears, caught up in the business of the traffic. Around me there is nothing but people; they’re there everywhere and all the time. They pass by, sell, stare into space, sleep directly on the ground (unless it’s a corpse). Misery in all her forms lives here. There is such a thirst for hope that people are prepared to pray to even any object, tree, statue in the hope of quenching their thirst for the Divine. It’s a world forgotten by comfortable Christians and everywhere I see so many lost people… so many…
All the way through that first night in India, bursts of noises from the streets climb all the way up the walls to infiltrate the badly soundproofed windows of my hotel room and arouse my Western feeling of security.
Confronted by the scale of this poverty, which has slapped me in the face, I am completely helpless. Alone, sitting on my bed, I pray for this country. My heart is broken, there is nothing I can offer them apart from my  tears, which form droplets all the way down my cheeks for them… Jesus, my master, silent but present at the foot of the bed, will maybe be able to make something out of them… (?)
Journey to the edge of the world
As soon as the leaders have joined me, the old cliché of the white missionary wearing a pith helmet is sent packing. Here the mission is managed by and for Indians… They are the ones who guide me through the human jungle of this country to the place of our next meeting.
We travel by science-fiction (or by train, it’s all the same!). The door of the old, tired train is wide open and I sit down as if on the edge of the water to dip my feet into the emptiness just above the ground which is slipping by.
At any moment I expect to hear the remonstrance of a ticket-inspector behind my back who, in his Swiss German accent, would say to me:
‘Nein, verboten’ (prohibited)! You can’t do that!!’
But no, here the people are not treated like children; it’s cool. (Maybe in Switzerland we are not as free as we imagine…?) By the side of the rails of the train track, people, always people… What are they doing? Are they watching time go by? They readily smile at me and I can see that it’s from the heart… (This time there’s no mistaking: I am on another planet!)
We pass by a public rubbish dump which goes on for ever; people are defecating there without any embarrassment. A stone’s throw further on, a starving child is looking for its daily food in the stinking rubble. In front of a makeshift shack, built with the help of the materials strewn all over the ground, an entire family watches me, in silence. That’s how the majority of the people on my planet live. It’s intolerable. Thank goodness my tears cloud my vision.
With anger in my heart, I grab hold of my pencil and draw for them, as in a cry of despair:
‘You are not forgotten!! You are precious, God loves you, His Son was born in your midst!!! Take heart!’
(One day my picture will reach them…)
Persecutions
The reception centre of the mission is an oasis of tangible peace, freed from the latent oppression which, elsewhere, you can sense pretty much all over the place. As well as being our meeting place, it is also that of the leaders of the church who have come from all over the country. Some of them have had to contend with inordinate distances to get here.
From the moment I arrived, discretion has been advised to me for, even if India boasts of being the largest democratic country in the world, freedom of expression is still sitting in the waiting room. Hindus believe in castes, people ‘of lowly birth’ aren’t even considered as animals; with resignation, they suffer contempt and slavery. It’s not money but a change of mentality that the poor need in order to cope. When they learn that the Son of God in person loves them and took their lowly position, that they are priceless in his eyes, their lives change radically and are set free from fate. No longer condemned to being a low caste, they take charge of their lives. The high castes, outraged at losing their unpaid workforce, urge the Hindu religious fanatics to rise up.
5,000 Christians from the Orissa region have seen their houses burnt, their women raped and their pastors brutally killed by stab wounds. The families that managed to escape found a ‘shelter’ in the jungle. But it was inhabited by other predators such as the tiger and illness…

The leaders of the different communities consulted each other: should they take up arms to defend themselves?
All, with one accord, opted for the non-violence which Christ teaches. And they decided to forgive… 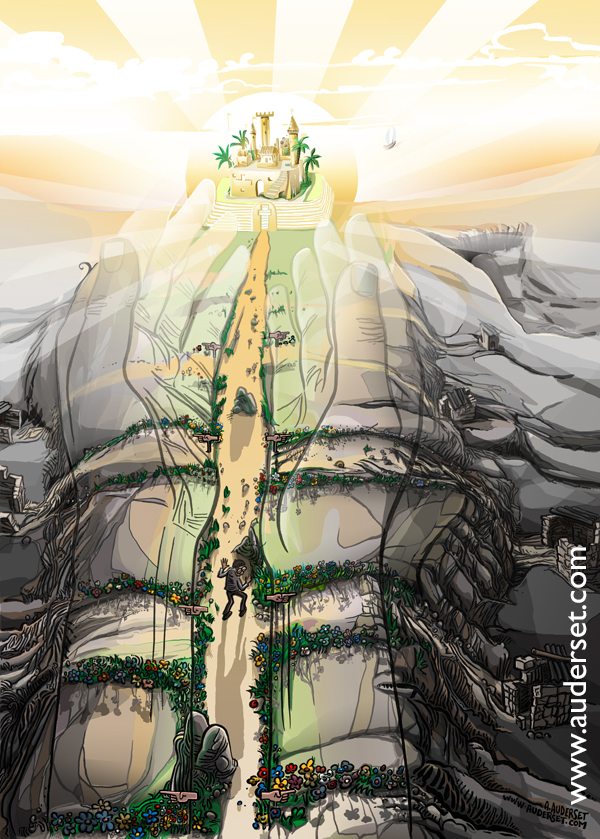 During my first night in India, I have the idea of a picture which will make it possible to present Jesus to someone who is unable to read and who would not have Western Christian culture as an option in his baggage.
The Spirit of the creator, symbolised by his two hands, indicates the path to the one who really wants to find the way. This requires being attentive to the signs and to His voice which whispers in the hurly-burly of the world to the one who is sincere.
This demands the ability to see the bigger picture, which wisdom gives, to realise that the easy little paths which society offers us all along our way are attractive, well marketed, but that their end is ruin. (Picture taken from the comic-book ‘Conventional Wisdom 3’)
This entry was posted in Blog. Bookmark the permalink.