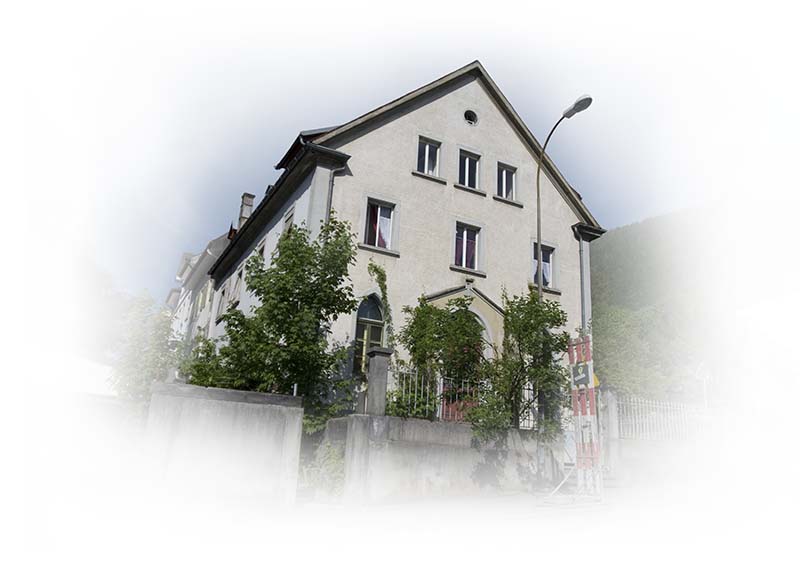 The messenger
“One day this house will be yours!”
These are the words of Luc, my pastor friend, as he points out the strange building in front of me.
“Come on, Luc… think about it! I am far too poor to buy it! With my family, we are living below subsistence level, quite honestly, how can you dream up something like that?”
He doesn’t say anything but has this annoying little smile which people have who know something that you don’t know…

The discreet return
The years have gone by and today, acting as if nothing was up, Luc announces to me:
“There you are! ‘The’ house is for sale!”
That same smile that twists his mouth prevents him from continuing his remarks. But, as they can’t stop themselves, they escape through his eyes and say to me: “Well then? Are you going to buy it?”
“Grrroooaaan, Luc! You know as well as I do, my financial situation hasn’t changed, and I…

“Eh? What are you talking about?… I didn’t say anything…”
He has this look of indifference that the guilty have when they want to pass themselves off as innocent by whistling a banal tune.

(Why is it that I don’t manage to have any normal friends!?)

The absent-minded detour
The following morning, as is my habit, I plan to go into the forest, but this twisty path has a mind of its own and because of it I find myself face to face with the building in question.
Now it is my thoughts which, unbeknown to me, are embroidering a whole web of fantasies:
“Hmmm…it is true that it would be ideal, my workshop downstairs, my family right above… cool…”

SLAM! Reality, which – as everyone knows – nurtures only aversion for embroidery, slaps me with its implacable logic and brings me out of my daydreams:
‘You’re broke! OK?!”
The following day, same again, the path, taking advantage of my inattention (I often have my head in the clouds), deposits me right at the same spot (oh, very clever!)
“OK, Lord, let’s get things straight; in this world, things don’t work like that, you need money to get a building… do you understand?”
I sense then that He has the same smile of connivance as Luc… (those two are hiding something from me…)

I am not deluding myself; Luc, the path, Jesus are going to use their complicity so that every day I (and my vigilante/distributor of slaps, ‘reality’) come back to the same starting point. So let’s look at the problem head-on…

The banker
How do you go about buying a house?
(Er…? Instinctively I slide in the direction of the bank…) The local media often talk about me, so much so that the banker recognises me straightaway. From the tone of his voice I have the impression that he is convinced that I must have come by limousine and that my chauffeur is waiting for me outside; I blurt out to him:
“Morning! I would like to buy a house; would you lend me the money?”
He enthusiastically hands me a form:
“Of course, Mr. Auderset! Kindly note down your monthly salary on this document (a simple formality).”
“My monthly salary? Er… it depends on the months (the life of an artist, you know…) my oh my. I don’t understand anything about accounts…
Fortunately I have a wizard friend who helps me fill in the form (well… wizard, accountant; they are one and the same thing!).

The true banker
The figures which the banker discovers have wiped off his welcoming smile, which up till then had resembled in every respect the one that appears in the company’s advertising.
“Er… Terribly sorry, Sir, I’m afraid it won’t be possible! For us to lend you money, you have to already have some yourself.”
Blimey! I do not understand at all the logic of this bunch of cronies! Their ties must be tied so tightly that they prevent the blood from getting to the brain… (?!)

Sheepish, facing the house, I explain to God two or three things that he must not have understood properly about the workings of administration in our lowly world, before moving away from it into the forest with him.
A few days later, I receive a strange visit from an elderly couple who explain to me that they had been planning to invest in the stock market (a grown-up thing), but that, after thinking it over, they had felt it would be wiser to invest in the Kingdom of God. It just so happens that a chance conversation with one of my friends led them to me… In short, they have lent me 100,000 Swiss Francs

(approx. 125,000 Euros), telling me:
“You have 40 years to pay it back.”
I go back to the bank but this time I don’t go to the counter first, I go straight to knock on the manager’s door (after all, when I pray that’s what I do too, I speak to God directly and not via an intermediary!).
And he agrees to lend me the remainder.

Nowadays I live in this house with my little family. Creativity and lots of fun overflow from every part of it. Digging in the cellar, I discovered a notice ‘evangelical church’. The people who laid the first stones of this building (in the 1800s) planned to make it into a church, a place of worship and human warmth. All the owners that there have been, since its foundation, have each time been servants of God…
I have kept the interior as it was, transforming the pulpit (the thing for preaching) into a drawing table and the large windows into a sprinkler of light. The exotic plants, just like the drawings, have taken over all the walls.

Praise be to the King of kings, the Banker of bankers, his paths are amazing for his most simple servants who allow themselves to be led by Him. He has compassion on them and blesses them in his time.
In the same time (no connection, but anyway…):

Willy Grunch (my comic book character) wins first prize for Christian comic books at Angoulême !!!
A prophet (who is passing through) tells me:  “Go, I will send you far away to the nations…”  And Boom! In the days that follow,
I am invited for the first time to speak in Spain and in the USA!