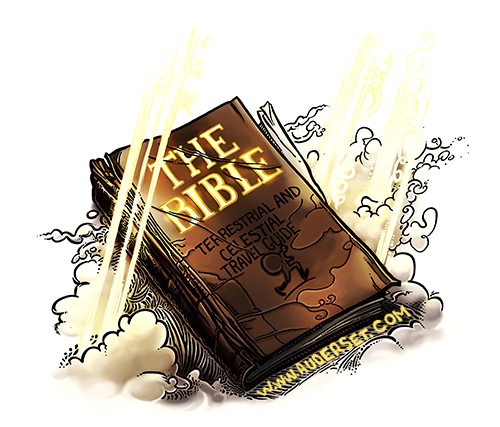 The unstoppable virus of faith

The way home from school has, frankly, become too short to contain the countless questions generated by the reading of Sandra’s book. The two friends talk for a long time outside the house. Then, for a period of three months, Véro invites her in for a cup of tea, but that’s just an excuse to pester her with questions: ‘So who is this God Auderset’s talking about?! What? You believe in him too!!?’ …

Sandra is someone who is basically humble and honest, willing to admit that she doesn’t have all the answers, sometimes even questioning whether she is a real Christian. But she answers her friend’s questions as good as she can. When Sandra turns up with the ‘Bible express’ (extracts from the Bible), it’s bliss! Both of them find answers to their questions.

Nicolas, Sandra’s husband, is then called to the rescue. So, an evening meal is arranged between the two families. For the occasion, Alex is given the comic book ‘Marcel’ (by the same author as ‘Date in the forest’) and he really loves it! It should be noted that the only books he ever reads are comic books… except that he is going to make an exception for this weird book that everyone around him is talking about (phew, it’s full of pictures!). Now the whole Berty family wants to know more and it’s at their insistence that the Purmalt* family initiates them into the exploration of an evangelical bookshop. It is Ali Baba’s cave: they blow their literary budget and complete their collection of Auderset comic books (which makes me a kind of ‘Alainbaba’!)… Even Kérane puts in some of her own money!

The treasure marked by a cross

Seized with googlesque desire, Alex, in two clicks, comes across the author’s testimony of his conversion. Intrigued, the couple sit down together to listen to it with rapt attention. The little guy explains his life in a simple, modest way. Here it’s no longer a matter of levels of initialisation or of mystical terms and other complications. Entering into a personal relationship with the divine is within a child’s reach. The sacrifice of Jesus on the cross finally takes on its full meaning: it was for everyone’s sins, it is for … her!

Each member of the family now reads their Bible assiduously (each his own one!). Little Eva even refuses to go to sleep unless her dad reads her a story from it. It touches him that he is discovering them at the same time as she is. The children’s Bible that she has been given has become THE favourite book of the little 6-year-old. She hugs it tightly against her. The place where she keeps this treasure is under her pillow, right next to where she sleeps. It’s no small matter: this book is the word of Jesus who is at work, radically transforming her whole family. What is happening here is something completely out of the ordinary and totally crazy … but absolutely real!

The voice of the Good Shepherd

Even if they have greatly reduced, the nightmares still come back. And, horror of horrors, right after one awful attack, Véro now hears a voice whispering in her head: ‘You see, God has abandoned you!’ Yet another abandonment!…

… Except that this time she hears another one which adds: ‘Don’t listen to that, God will not abandon you!’

She still doesn’t know the sweetness of this voice: it is the voice of Jesus, who is entering the game again! It is so soothing that, for once, she manages to go back to sleep!

* not their real name…

to be concluded next week…