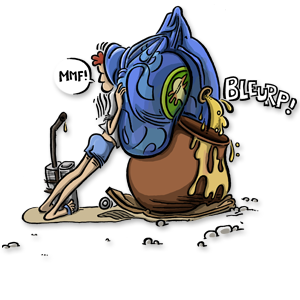 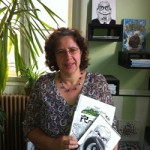 DO YOU WANT TO MAKE ALAIN’S COMIC BOOKS KNOWN?

Having had the privilege to rub shoulders with Alain, it’s true that the desire to promote his works has always been present in our family. We make the most of ideas for birthday presents, wedding presents, thank you presents, or simply for the pleasure in giving!

While visiting a church that we go to from time to time, I felt I wanted to take along with me his latest comic book; just off the press.  (We always have a small stock at home in case!)  With 4 comic books under my arm, and a news-letter “El Valero”, I asked the elders permission to present the comic book: having done this the books were sold in a flash!  From this experience came the idea to extend such occasions.

IF YOU HAVE THE SAME DESIRE AS I HAVE TO MAKE THE WORKS OF ALAIN KNOWN, OUR KITS MAY INTERESS YOU!

They could be used at various occasions such as; seminaries, worship evenings, fetes or others.

We have imagined two kits (cases) consisting of various articles from Alain’s range of goods (only available in French). 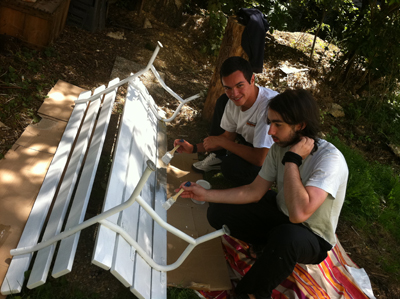 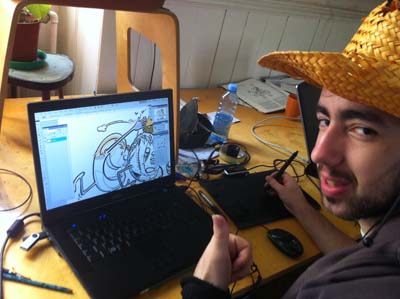 Wonderful! Since last week, the studio has received 3 helpers to colour the comic books!  Sometimes they also colour real things like this bench that will be put in front of the studio.

Jean-Vincent: A student in a school for creating video games in Paris.

Victor: A young Rumanian, full of the joys of life.

Salomé: (only with us for a week) who has achieved her own comic book page as well!

It’s a little like a non-stop holiday camp here! We all accompanied Salomé to the station (family and studio workers) and seeing the train pulling out, were all affected.….

Tuesday: We received a group of youngsters from Paris… they have come to re-paint the fence and at the same time to have a good time together.

Between a planetary vision and the day to day needs, happily there are:

There is Céline without whom the newsletter addresses would be dancing the Samba; and André who often comes to the aide of computers having fits!  Théo, the upstairs neighbour, is always available, and Luc Normandin, the Pastor of the small Evangelical Church of the “Roc” (where Alain goes on a Sunday), is always ready to raise the troops moral; as well as so many others that one forgets to name here… 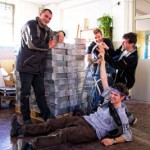 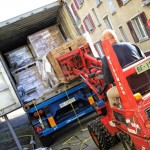 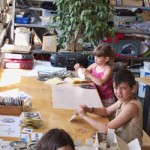 There’s always a place for you!

The Auderset studio couldn’t continue without all the willing people who gravitate around it.  It’s not just an artist’s studio, it’s a unified community motivated to share human values with our present society, in good fun and in fooling around.  Whatever your abilities…(despatches, transport, constructions, colourists, office work etc.,) we could do with your help!

A pre-colourist (no need to be a professional, one learns on the job!)

Someone to chop wood. This is because every time the artist comes back from his walks in the forest, he brings back a branch; and now, there are piles of them!  Alain hopes one day to have a stove (with chimney) to heat his studio with…..at least, the wood’s already there ….however, for the moment it is overflowing everywhere and needs chopping!

Some diggers for the cellar. (It’s just under the studio and needs consolidating so that it doesn’t “crack”!)

Someone to put in windows (it’s not well isolated here in the winter!) 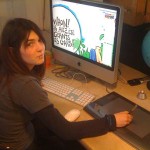 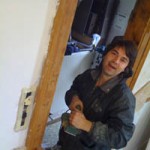 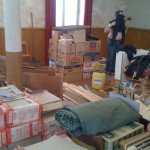 Do you have any projects, ideas or propositions….regarding the studio Auderset? 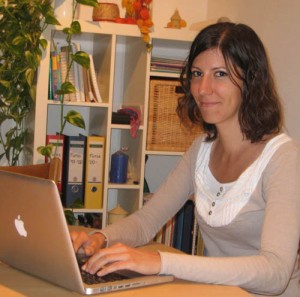 A special thank you to Céline who, for many years, has faithfully helped out with the administration of news letters and addresses and the pre-colouring of the comic books.