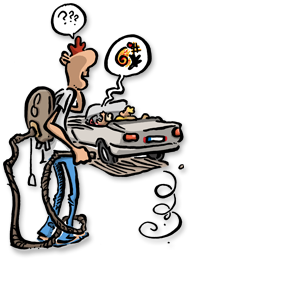 News from the front (heavy metal, wood, pebble and classical)

Over a period of a week

A civil engineering college hosted an exhibition of my comic books.
Maybe next time there’ll be an invitation from the amphibian and geological research center of the communist north pole, you never know…
Every 45 minutes throughout the day, every day,

I gave a drawing master class to an entire class of teenagers
who could ask me whatever questions they wanted.

That’s when I realized just how much God had touched their hearts…
That’s our deal: I take care of the drawing, He takes care of hearts.

Questions
Time and again, they were about faith.
Although it’s true that our generation feels lost,
one thing cannot be denied: it wants to find a way to faith…
They even stayed on during the lunch break, (it’s not as if I’m handing out free drugs or anything!)
Some waited for their friends to leave before coming to ask me more…

A good omen
A selection from all my comic books were displayed on the wall.
The drawings that made the biggest impact were from
my next album: ‘Conventional Wisdom 3’ (accounting for more than half of the framed drawings sold).

The bar that we played in on Saturday was a heavy metal venue (wood not being a musical genre).
Although we would acknowledge some of our influences come under this category of noise,
rock is more our style (I know, pebble isn’t a musical genre either).

Before unleashing the sound,
we got into a circle outside and called on the Holy Spirit’s help.
In the end, we even had to play two encores,
the barmaid said it was the best concert she’d ever heard in the venue (and it wasn’t because it was the first concert they’d ever had…very funny you guys!)

Leaving the venue (like, really late at night),
we were surprised to see just how unsafe the neighborhood was:
along both sides of the street, prostitutes were touting for business
and men were mistaking other women for their wives.

A ballet on paper

A dance company,
composed of dancers who had been chosen to be principal dancers by the famous Maurice Béjart
has created a ballet based on my last comic book ‘Marcel’s vacations’. (totally out there, don’t you think?!!)

They’re not at all connected with the Christian scene,
but they were touched by the story of the child who’s dying of hunger,
the charity ‘Compassion’ will also be there! (I’d quoted them in the book)

I’m going to open the show with a guitar solo (Gulp! All alone as well!)
and I’ll accompany the dancers with the deft movements of my pencil (there’s not much else I can do).
All this is happening at the Octogone de Pully theater!! (Lausanne, Switzerland)

The performance has already been staged once, but due to popular demand, it’s to be put on a second time.
Find out more (only in French).
http://www.auderset.com//accueil/event-ballet-dessine-novembre-et-decembre-2012/